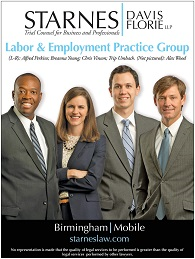 Currently, no law guarantees Alabama employees a right to paid family leave. Under President Donald Trump’s proposed budget, that would change. President Trump’s new budget would mandate up to 6 weeks of paid family leave for both mothers and fathers following the birth or adoption of a child. This leave would be paid through state unemployment insurance reserves, which are funded by payroll taxes on employers. The White House stated that it would allow the states “broad latitude to design and finance the program.” The program is projected to cost $18.5 billion over ten years, but anticipates that part of the cost would be offset through proposed savings in other areas, such as eliminating improper unemployment insurance payments.

Of course, the budget ultimately requires approval by Congress and will likely face tests from both sides of the aisle. Democrats have pushed for more expansive paid leave, whereas some Republicans have balked at the idea of a potential tax hike on employers. Alternatively, a different approach to paid leave was recently proposed in a bill by Alabama Representative Martha Roby (R) that would allow employees to save up their overtime pay toward paid leave. It is important for employers to monitor this developing issue, and we will keep you informed about the state of the law in this area. Until then, employers are free to offer paid family leave to their employees, but are not required to do so.