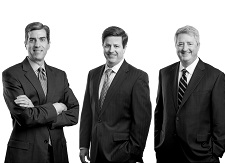 Best Lawyers, the oldest and most respected peer-review publication in the legal profession, has named Richard Davis, Joe Miller, and Christian Hines Best Lawyers – “2021 Lawyer of the Year.”

For Mobile, Alabama, Christian Hines was named Lawyer of the Year for Medical Malpractice Law – Defendants.

“Best Lawyers designates ‘Lawyers of the Year’ in high-profile legal specialties in large legal communities. Only a single lawyer in each specialty in each community is being honored as the ‘Lawyer of the Year.’ The lawyers being honored as ‘Lawyers of the Year’ have received particularly high ratings in our surveys by earning a high level of respect among their peers for their abilities, professionalism, and integrity.” (The Best Lawyers in America).